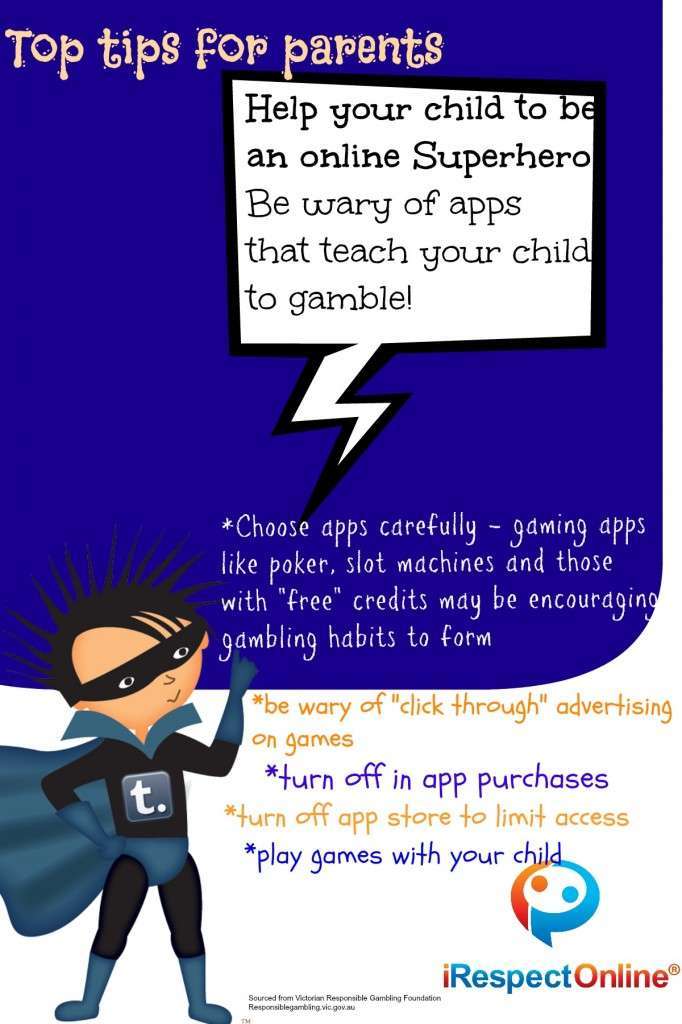 Accessibility and availability of games and applications which encourage or simulate gambling are saturating the market for children in the 12-17 age group.

The Victorian Responsible Gambling foundation  (VRGF) is working hard to generate awareness of the possible massive social issues which our children may face in the next few years if we don’t get proactive on this important issue.

Often we don’t even correlate the games our children are playing with gambling, however any game which rewards with credits and bonuses may be actually “grooming” our children to have issues in the future.   According to research collated by the VRGF there has been a huge explosion in online and mobile gambling apps which are created in such a way as to avoid the regulation of the traditional gambling market.   They do this because winnings cannot be rewarded as cash.   We should be concerned.

Many parents and teachers see gambling games as being a good learning activity, and in the right environment, with controls this can indeed be true.  What is vital is that we ensure we are monitoring the usage and behavior of the children when they are using such apps, and providing education on the addictive nature of such games.

The term “free to play” is deceptive as certainly early levels may have no cost, but quick rewards encourage the purchase of add on credits and upgrades, and many apps also are saturated with in app advertising which is designed to appear as part of the game.   In Australia alone in 2011 the free to play industry turned over more than $60 million worth of business – that’s a lot of upgrades and addons.

With a choice on iTunes alone of over 50 million apps (all apps – not just games – May 2013) the lack of industry regulation is certainly raising its head.  Add into this the many games available on facebook and we can see the increasing risk of potential gambling problems.   The addictive nature of games can be seen in the longevity of apps on facebook such as Farmville2 and Candy Crush saga both of these apps have over 40 million users per month, with an average daily user count of 15 million for Candy Crush and 8 million for Farmville2.    Here’s a fact that might really make you sit up .. King who own Candy Crush and who do not release their profit figures, is believed to have turned over more than 500 million in profit last year – staggering!

The fact the apps are portable and readily accessible on multiple devices means that once a player has a problem, the problem can follow them everywhere!

Behaviours and symptoms to look out for in your children include:

As we stress at irespectonline, when it comes on online behaviours our children tend to imitate what they see.  Be very wary of gambling or celebrating wins in front of young children, who may not yet be able to understand the risks and the poor odds of winning.

Join the 100 day gambling challenge now!    If you or someone you know has a problem with gambling, seek help here or call the gambling help line 1800 858 858

Have you checked your reflection lately?