Have you been indundated with requests to connect on Meow Chat?    Yet another instant messaging service, this one offered through Facebook, on itunes and google play also allows contacts with randoms, so it’s kind of bringing in some of the dating/hook up/meet up aspects of Tinder along with aspects of WhatsApp.   MeowChat claims to already have over 1,000,000 users!

What is disappointing to me is that yet another app is launched onto the market without much need seen for explaining how it works, who its suited for and how to stay safe with it.   The very first thing that has happened for many is that upon downloading the app, people accept the “want to send a request to all your facebook friends” question to “build their network” and instantly they have given the app access to all their friends and the spam begins!

There are even anti meow chat twitters starting up due to the inundation of people allowing all their contacts to be sent a request!  Perhaps this kind of release just might do more damage than good to the apps reputation(see slightly sanitised version of a twitter search illustrated!). 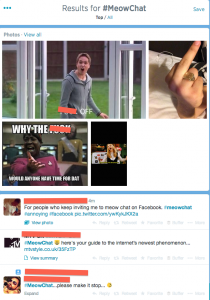 As with any App its important to look at what the app does, who might be getting access to your information, whose information you are also giving away and any risks to the more vulnerable in our community, particularly our children.

This app in particular has a very cute little kitty cat – so it’s going to have broad appeal especially to the younger children, the very ones we really don’t need on an app that allows random chat.

Here are a few points I would encourage you to consider before downloading.

I would highly recommend that parents in particular have conversations with their children about the use of such an app and the risk that might arise from “random” meet ups.   Ensuring they do not give away their personal details, full name and location is really important for their safety.   That 13 year old your 12 year old thinks they are talking too might well be an adult lurking.    Other areas to consider relate to linking to other social sites, such as Tumblr.   Tumblr has a lot of content that is not suitable for younger children so it is important to make sure you know which sites your child is linking up to and just what they might be exposed to.  Tweaking your child’s phone settings and turning off location/gps for the app is recommended.

A few sites I found discussing the app said there was already a lot of harrassment towards girls and sexual behaviour associated with the app.

If you don’t want to receive invitations, head over to your facebook page, click on the GAMES tab (under Apps on left hand side), find a meow chat request and click on the X.  You should then see an option to block further requests.  You can do this for any other app you are being sent requests for also.

Have  you already been invited?  Do you think you will use this app?

I first used Bizzaboo at the Social Media Examiner Conference in San Diego this year, and I thought it was a wonderful app.    This is not a sponsored post or affiliate or anything like that –  simply think its a really good app.   I’m currently at a conference and would love to get the people involved, so I’m posting here to show them what to do and what the app is used for.    I’m quoting this off the Bizzaboo page and I do think it’s really worth looking at.   If you know other similar apps, please let me know!

So in the case, for those of you in Brisbane – it would have been great for the organisers to set something like this up (didn’t cost anything) and I created it as an attendee – but here is what is for:

Join our networking community by following the steps below:

Its easy and then you can see all the tweets (remember to use the #Edutech13) and its much easier to track!

Hope to connect with some of you attendees soon! 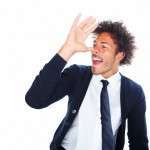 Only the start of the week and already we have had more issues with Twitter.   The latest concerns the NSW government seeking to crack down after rugby league player Robbie Farah received offensive remarks after the death of his mother.   Then our Prime Minister Julia Gillard’s father passed away and she received much support from her followers, but there was at least one person who made an insensitive dig.

Is more censorship and taking legal action really the way to go?    Are we over-reacting?   I often talk about the need for us to get some resilience and start to teach our children (and ourselves) how to walk away and ignore and/or block those who seek to upset and gain notoriety through insensive, rude and disrespectful comments on twitter, facebook and blogs.

On one hand many celebrities, sports people and others use social media as a means to get their messages out there and in some ways to circumvent the media, yet when it doesn’t play out the way they want there is an outcry.   We already have laws which cover hate speech (inciting hatred towards a specific person or group, usually involving race or ethnicity), we have communication laws preventing harassment or threats (if a person receives a genuine threat then they should go immediately to the police) and in Victoria we also have Brodie’s law.  Brodie’s law makes serious cyberbullying and bullying an offence which can attract sentences of  up to 10 years imprisonment.     So how much further do we need to go?

As much as many of these comments are offensive and shock us, do we really need to give them more power by giving them so much publicity?   Here we have the worst messages being picked up by the media and highlighted.   Not everyone who makes a derogatory, rude or insensitive remark is a troll, not every troll is out to hurt, but what they all love is the extra exposure and the promotion of their messages.    Why don’t we just refuse to give them any more publicity?   We have to stop rewarding the poor behaviour by giving them publicity – don’t we?

We can use social media for good just as much as we can use it badly, but the existing laws already protect us.  We must not encroach on our ability for free speech and to be allowed to have an opinion, but we do need to demand that opinions be given respectfully and without vitriol.

Let’s be sensible, just for a minute.    How many times a day do we think that someone, somewhere in the world has made a nasty comment about someone?   A joke in poor taste or bagged out a celebrity or politician?   I’ve heard animal activists threaten pretty nasty things to other humans, I’ve heard or read  some pretty full on “punishments” suggested by various sectors in our community just because they have strong views about whatever subject happens to be their passion.  In fact  I would guess that such remarks occurs many times a day, somewhere in the world.   Do we care about those?  Not particularly.  If we dont physically hear it, we don’t care about it.   Because social media is a public forum it is this fact that seems to really get people upset.   Again, when social media promotes us in a positive way we are all joyful about it, but cop a criticism and suddenly we need new laws to control it!   We really are being way too thin skinned about the whole thing.   It’s like teasing – it’s part of how we learn and develop resilience, it’s when it goes past harmless face pulling to bullying when it becomes a problem.

My own passion is very much centred on making the online world a more respectful place,  but I also have respect for the myriad of opinions and views which exist in this diverse world of ours.  I certainly don’t agree with many of them, but if I want to have a say then I will add a comment or write a blog, knowing full well that by making my opinions known, I am opening up possible dialogue not just with those who may agree with me, but with those who don’t.   This I welcome (provided it is respectful) because then I learn more and my understanding develops.

When it comes to people writing nasty or rude things which are not actually bullying (such as speaking ill of a deceased person) then really we just have to say to ourselves, what a #^&head, delete the comment and move on – thumb our noses at the fools who can’t make logical arguement.   We can’t tell humanity that it can only be seen and not heard, but we can choose how we respond.   Call’s for more laws to me represent a lack of understanding about the media and a very superficial way of dealing with the issues.     Let’s keep the conversation going and just demand respect – that’s the non negotiable part.